In the falling of the wave

Waves are inspiring
Not because they rise and fall
But that each time they fall
They never fail to rise again.
(Josh Billings)

I’ve been spending a little time in my hometown of Gorey lately. It’s has been great to connect again with people I may not have seen for years. Where you grow up never quite leaves you. It becomes part of who you are. The loop around the local town park has a magnetic draw now every bit as much as it did then. The unscripted chats with familiar faces along the way carry you back to a time you had never really left behind. So much has changed, yet here, in the town I still call home, so much remains the same. The ebb and flow of life has a peculiar way of bringing you right back to where we started. 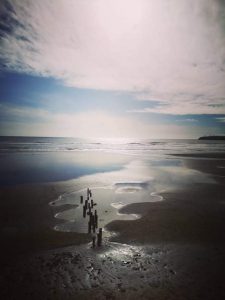 There’s an elemental solidarity that kicks in when you meet a lifelong friend. Now that we’re free to mingle again, the simplest of encounters have taken on a whole new meaning – a day at the races, a meal together, a walk on the beach, a glass of vino or two. The chats invariably drift into recalling the days of youth as though they were yesterday. No matter what has happened in between, nothing dims the value we place on each other. Few of us have cruised through life unscathed. We’ve had days when we’ve glided the wave, others when our hopes came crashing down around us. Conflicting currents have led us to where we are now. With years comes wisdom. There are things we all wish we could have done differently. There’s a code between friends that needs no words… a loyalty too!

I loved growing up so close to the sea. Courtown, as a child, was our very own exotic paradise; sun drenched beaches, the amusements, the walks in from Ardamine to the harbour for our weekly chips and can of club orange – one taste of the sea breeze years later and you could still smell the vinegar. I remember working on the ghost trains in my teenage years. No one warned me on my first day to keep my feet off the track when it came to slowing down the returning train. It was grand if there was only one or two on board – an entire family – let’s just say I limped home that night not sure whether to laugh or to cry. I think the laughter won out. I’d still be likely to do the same. Sur God love me! 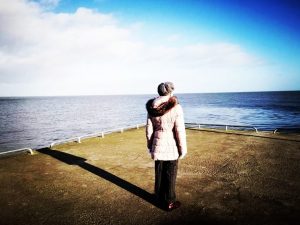 Last Sunday, we took my mam out to the harbour for a stroll and a cuppa. We were lulled seawards by the sound of waves rolling into shore. It was beautiful. In her daylight reverie, Mam retrieved from somewhere deep within stories of people she often met on her early visits to this seaside resort. There are faces mam knew she would no longer see; Eric and Maureen Willoughby from ‘The Taravie’, Robbie Mac. From ‘The 19th’, Vincent Browne from ‘The Courtown Hotel’ and so many more – all hard working, all kind, all who created a space that put a value on everyone who came through their doors. Mam had ran a pub and restaurant for most of her life. Their ilk is of a kind that cannot be found so easily these days. Some people leave imprints on the sands of time no tide can erase.

Mam insisted we close our eyes and take a moment to soak in the stillness. We followed her lead. It was a precious time. There we were, side by side, small, tiny, miniature creatures alongside a vast expanse of limitless ocean that eased out far beyond where the eye could see. Wave after wave rolled to shore in a timeless reminder that we are part of something far greater than ourselves. Each wave carried a goal in life that I could never have reached on my own; my days as a teacher in Waterford, the Movies@Gorey project that I rolled out over a decade ago, our tours and concerts with The Peace Choir, the 4 years of research and subsequent thesis for my PhD – all leading to the journey Elaine and I have embarked on with Waterford Camino Tours. In the moment I felt gratitude for the life force that sent me here and for the people in my life that have made it all possible. 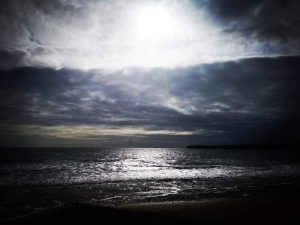 It was getting cooler now and it was time to go. The light re-appeared between parting clouds as if to nod us gently in the direction of home. I remembered a time some 20 years previously when it was not so easy. Storm clouds gathered then in a way I could never have imagined. February 12th, 2002 jolted my life into the unknown and I still feel the tremors. I was in a foreign land with nowhere to turn. I knew instantaneously that my life would never be quite the same again. And so it proved. The calm persona on the outside conceals a deeper, more fragile, truth. It has taken me a few years to find my voice again. Our past does not define us; it helps us place a value on what really matters. Those who judge from the wings have no idea. They do not shape what you can still become.

This moment by the sea was strangely cathartic. Little did my mam know what I was re-living. Elaine sensed it. It was like stepping outside myself for a moment and watching all that happened pass before me in the prism of my mind’s eye like flickered reels on an old film. My life is very different now and so am I. I know that I am where I am today thanks to the people I have around me. They have been my rock. They never stopped believing in me even when I was most inclined to doubt myself. They have guided me when my own coordinates became dimmed. Human kindness has the power to reach you at the deepest of levels and turn your life around. 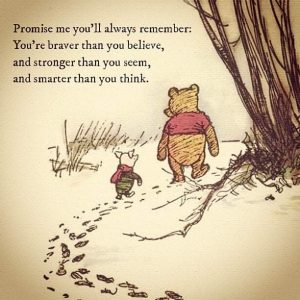 To swim against the waves is an impossible task, but, if you can manage to, you will reach a shoreline beyond your wildest dreams. Many of you carry burdens far greater than I ever will. Hang on in there no matter what the world thinks. You are a child of the universe, no less than the waves at sea, you have every right to be here. Your story matters. God is love and those who trust in love want for nothing. When you’re feeling like you have nothing left to give, remember the challenges you have pulled through to be where you are now, the setbacks you have overcome, the battles you have won. The journey through life can test you to the limits, I know, but still with courage, you learn to catch the wave again as if for the very first time.

Here I am again, walking in circles around the shore.
Lost after I found the truth,
Heart turned upside down once more.
The sound of the waves are healing,
covering what the pain is revealing.
The sand cushions my footsteps
so that they may take me,
and help me open the next door.
(Renee Rentmeester) 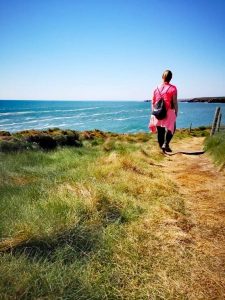 Dr. Phil Brennan and Elaine are looking forward leading groups from the States, Norway, Britain and Ireland on our signature ‘Celtic Camino in the steps of St Declan’ over the coming months in association with Cahir House Hotel and Mount Melleray Abbey along with our ‘Celtic Camino in Ireland’s South East’ in association with The Tower Hotel, Waterford. We welcome our first groups from Celbridge and from Killarney this March. We will also be teaming up with Original Irish Hotels to roll out unique Camino experiences to include Glendalough, St. Mullins, Ardmore, Gougane Barra and Dingle later in 2022. You can contact Phil and Elaine directly on info@waterfordcamino.com