A light flickers… Christmas on no man’s land

Christmas time has its own magical allure. The lights, the gifts, the music, the myriad of sporting spectacles beamed live to our sitting rooms, the gatherings among family and friends, the scent of the turkey roasting in the oven, the frenzied shopping, the carnival atmosphere in town; all combine to create something wonderfully festive that eases us almost unknowingly through the dreariness of the Irish winter. This year, after the year we’ve had, it all seems very different. Now, as the year rolls to a close, a faint light makes its presence felt. In the dark, the eye begins to see.

This Christmas we’ll value those we have around us that little bit more. We’ve missed people in a way we could never have foreseen. We’ll have them home again. Human connection is everything. For a while, it felt like we were stripped of all we once lived for. Maybe we needed the nudge in the right direction. We have retrieved what is best in us. We checked in on each other while all around us human goodness carried us through the madness of it all. In this unwanted space across a once obscure land, we found ourselves. It would be a shame to let it go. 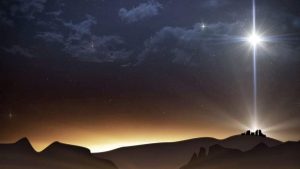 The star still shines, oft’ hidden and unnoticed, to light the way. Beneath the layers of tinsel and chimes, lies the age-old story that gives it meaning. Christmas 2020 is our time to see again what might have passed us by before. ‘Silent Night’ brings us back to where it all began. The poignant lilt of the harmonies of this age-old carol leads us to a place we may have left behind. There we find the simple truth hidden within its hallowed lines. We sense that we are not alone… that our story is part of something timeless in our midst. Our song, though flawed and broken, lingers long into the night. 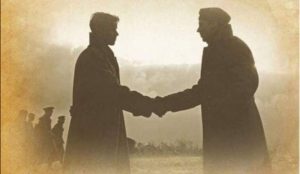 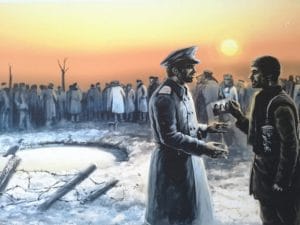 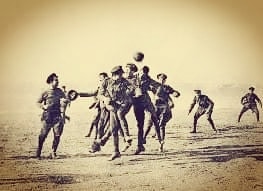 A young British soldier, Albert Moren, near La Chapelle D’Armentieres, France, recalled: “It was a beautiful moonlit night, frost on the ground, white almost everywhere; and… there was a lot of commotion in the German trenches and then there were those lights – I don’t know what they were. And then they sang ‘Stille Nacht’ – ‘Silent Night’. I shall never forget it. It was one of the highlights of my life.” Echoes from afar whisper softly through veiled skies.

Against the bleakest of backdrops, a spark was lit and the shroud lifted. Humanity had become participants in the nativity story 1914 years on revealing the face of the infant Jesus to the world. Their song echoes in the stillness of the night. Hidden in the silhouette, their hushed murmurings can still be heard. The men of 1914 did not just remember the first Christmas; they lived out its meaning.

I was privileged to travel to Messines in December 2014 with The Island of Ireland Peace Choir to pay homage in song to the young men of the Christmas Truce on the 100th anniversary. It was deeply humbling to see the graves of two Irishmen side by side in one of the tiny cemeteries scattered across the furrowed fields. On one headstone: 24th of December 1914, Private Delaney; on the other, 29th of December 1914, Private Murphy. In between… the Christmas Truce. Something timeless spilled out onto the battlefield that silent night that must never be forgotten. Sleep in heavenly peace. 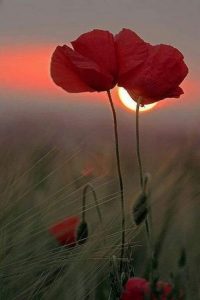 In the stillness, you will hear. As sparrows soar homeward in telepathic waves through the evening skies, you will see. Slow the pulse down and you will feel their truth rise through the shimmering light. Then it is only kindness that makes sense anymore. We honour them today as we did then – in song. Its soft refrain lilts through the cold air… to somewhere only they know.

“When you sing Alleluia
You must give your bread to the hungry
Clothe the naked
Shelter the stranger
By doing this not only does your does your voice sing
But also your hands are in harmony with your voice
As your deeds are in accord with your words.
May your light lead the way for others to follow.”
(St. Augustine, 3rd Century AD)

This Christmas members of the Peace Choir and friends managed to get into the Edmund Rice Chapel to record, within the current guidelines, our 10th annual ‘Christmas Truce 1914 – Carols Vigil’. This year, we felt it was more important than ever before to tell the story in song. It can be viewed on our Waterford Camino Tours facebook page anytime from 8pm on Wednesday 23rd of December, 2020. 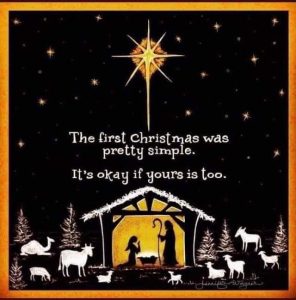 Phil and Elaine would like to wish you all a peaceful and happy Christmas and everything you wish for in 2021. For further information, check out our website on waterfordcamino.com or email us directly at info@waterfordcamino.com

« This Is The Time To Be Slow
Before you know kindness… »