“A journey of a thousand miles begins with a single step”

“How strange that the nature of life is change, yet the nature of human beings is to resist change. And how ironic that the difficult times we fear might ruin us are the very ones that can break us open and help us to blossom into who we were meant to be.” (Elizabeth Kubler-Ross)

The road less travelled can never be mapped out in advance. You cannot be sure what awaits as you make your way no matter how clear your coordinates. Yet it’s strangely liberating to come off the beaten track and feel the crisp sound of freshly fallen leaves beneath your feet. Your steps become more measured, your antennae more finely tuned. The habitual can dim the senses. The circuitous route often leads us to where we are meant to be.

Early morning by the river lulls us unknowingly beyond the fretful stir of the city. Here, 6 kilometers down the Waterford Greenway, the cadence slows down in unspoken harmony with the tranquil stillness of the Suir. All around you can see signs of what has gone before… the old railway line, Viking ruins shielded beneath its grassy vault, the graceful foliage of Mount Congreve Gardens 300 years on, the desolate ruins of an old watch tower desecrated by Cromwell and his troops in times gone by. We become temporary voyagers in a timeless odyssey.

In the silence, you can feel the spirit of those who have gone before. Beneath the mossy banks lies a sign that reads: “Here is the place where the fishermen stopped to have a cup of tea before they made their way to Ballygorey.” Their faint murmurings can still be heard. The moorings too, almost camouflaged in their green overgrowth, remind us of a time when farmers loaded their livestock onto the awaiting barges to sail with the tide into the city 4 miles downstream. Their work was done along the quays, maybe a drink or two consumed to mark the sale, before the turning tide would bring them safely home again. Humanity and nature – in perfect sync!

The Dunmore East Cliff Walk is perched above the village in silent homage to those who have passed this way for centuries. 200 years ago, young men from neighbouring Portally, Ballymacaw and Rathmoylan walked this very path to excavate boulders of rock from the cliff below as they sculpted the harbour we have today. Here, on the new footbridge beneath the cliff, we come face to face with curious remnants of a bygone time; footsteps, railings, carved rock – the railway line from the cliff to the harbour has all but disappeared. It’s good to pause on occasion and listen. Faint strains echo through the citadel of stone to calm the stirrings of the passer by.

No one person embodies the history of a place more than Tom O’ Mahony. 36 km down the Waterford Greenway, O’ Mahony’s pub defies the gravitational pull of modernity. Tom’s casual, languid style is in keeping with his quaint surrounds. Here in this hallowed place untouched by time, we sense we are at home. Pictures of another age adorn the walls, like speckled reels on a film, drawing us beyond the world we once knew. A cuppa does not come easily around here. Tom rings inside to the kitchen and his wife Helen will arrive out minutes later with tea/coffee/biscuits on separate trays for each of our visitors. Wouldn’t change it for the world!

Tom and his wife have resisted the advancements of today for age old decency, hospitality and kindness. The Greenway has seen the former railway line outside his door reverberate to the beat of times passed. Fair days of old are the stuff of lore around here. Carriages thronged with livestock would depart early morning from Durrow Station on a Monday and Thursday and by evening tired and thirsty men would retreat homewards. Time with Tom over “a pint and a half one” brought ceremonial closure to the sales of the day. Nostalgia falls gently in these places. In a world that makes you push for more, this man is simply happy with what he’s got.

Unscripted events make life worth living – moments that happen in ways we least expect. When we venture outside our normal frontiers, we tend to meet people who help us to see more clearly. Brendan Glody is one such man. Brendan leads our boat trips out from the harbour in Dunmore East along the coast. The kettle is always ready to boil as we board the ‘Keltoi Warrior’. We’d have our cuppa and listen to the waves lapping against the brow of the boat oblivious to the world beyond our immediate gaze. Time with Brendan is precious time!

On a recent boat trip, we anchored at the isle for a while in the relative calm of the Bay. Brendan regaled our visitors with fishing stories of old and recalled a particular night off the West Coast when his own boat sank and he and his mate had only a raft to cling to. Their fate depended on one flair they had salvaged from the sinking ship. At the very moment they released it to the sky, a fisherman 3 miles away took a breather from sorting his catch and spotted the red hue shoot across the darkened canvas. It was written in the stars!

Asked by one of the group how he felt as he and his mate drifted perilously for hours that evening, Brendan’s response was revealing. “I’d have liked a bit more time to say goodbye. All that flashes through your mind are those you love most – your family. The rest doesn’t matter. Then, without even thinking about it, a kinda peace came over me. That was it really. I was ready.” Little did Brendan know that the person who asked the question had herself lost her husband tragically in an air accident in the Blackstairs Mountains only 2 years ago. His story was reassuring beyond words.

Leaving the sanctuary of the harbour brings with it considerable risk. To navigate the stormy seas you have to trust your deepest instinct, your gut, and simply hang in there when the tide turns. You know you’re going to be tossed about a bit as you wade your way through the turbulence, but you’ll find the reserves within when you need them most. Only when we’re tested do we realise what we’re made of.

I’ve been following the story of former 2fm and Lyric fm presenter Gareth O’ Callaghan with real interest in recent months. Gareth has been diagnosed with Multiple System Atrophy, a rare debilitating illness that can cause rapid degeneration of muscle tissue. Reflecting on an agonising muscle spasm that he had to contend with the previous night, Gareth had this to say in one of his regular posts:

“I suppose in that moment of unfamiliarity in the darkness last night at 4am, I found a different strength… coming from somewhere within. I was experiencing a challenge that was being thrown at me that I had no choice but to face head on… Fear focuses you to be nothing other than what and who you truly are so that you can pass through this terrifying experience; and in its aftermath to feel the newborn layer of strength and resilience that grows deep within you.”

Gareth’s waning sinews have not crippled his spirit. He lives by a simple mantra – connect within and the world becomes brighter. He lights the way for all of us. 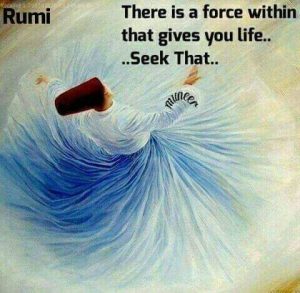 Each one of us have a song to sing in the wider symphony of the universe. We may be miniscule in the greater scheme of things, but what we do with our lives here and now does matter. Courage is not the absence of fear but a willingness to walk through fear in the pursuit of something better. Life is fleeting. Seize the moment, take that first step off the beaten track, lest it pass you by.

Dr. Phil Brennan and his wife Elaine invite you to share in one of their specially tailored Caminos through Waterford County during 2019. The Waterford Camino experience blends walks/cycles, motivational talks and music.