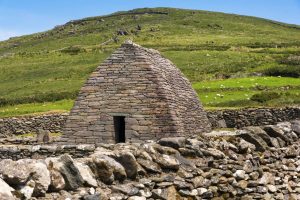 Cosán na Naomh, (The Saint’s Road) situated in West Kerry on the Dingle Peninsula is an old medieval pilgrimage route which leads from the beach at Ventry to the foot of Mount Brandon. The path is 17.7km in length and its goal was to bring pilgrims to the base of Mount Brandon. People have been traversing this route down the centuries, and indeed it may even have been a pilgrimage route in pre Christian times. This route is interspersed with sacred sites among them the famous Gallarus Oratory and Kilmalkedar Church.

Mount Brandon is the second highest mountain in Ireland at 3027 feet. It stands at the western edge of the Dingle Peninsula. The mountain has an air of mystery about it as it stands so majestically, often shrouded in cloud and soft Atlantic mists! Legend has it that St. Brendan, who is the patron saint of Co. Kerry, spent three days praying alone on the summit of Mount Brandon, after which he slept and a vision of an angel came to him and promised to guide him to a beautiful island.

It is said he then got his boat and fellow monks ready and set off on his epic voyage, the Navigatio Sancti Brendani, (The Voyage of Saint Brendan) which became one of medieval Europe’s greatest travelogues! On the top of the mountain where this vision took place there are the ruins of a little oratory, Teampaillín Bréanainn to be seen, and a few yards away is a holy well also named after Saint Brendan. 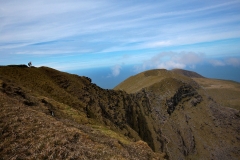 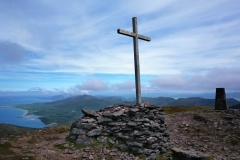 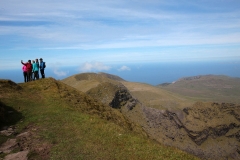