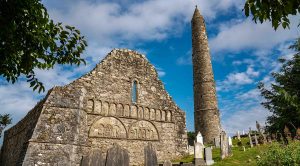 Ardmore is thought to be the oldest Christian Settlement in Ireland and it is said to have been founded by Saint Declan who lived in this area of Waterford at some time during 350AD-450AD. This would mean that he turned this area of Ireland to Christianity many years before the arrival of Saint Patrick. Ardmore is home to Saint Declan’s well and one of the best-preserved and oldest Ecclesiastical sites in Ireland. This amazing seaside location is the perfect escape for anyone looking for a tranquil vacation in beautiful surroundings.

As you approach the mystic ruins of one of Ireland’s oldest Christian sites, it a strange and wonderful experience to know you are walking into a site that has seen opposition for over 1000 years. That this was the site of get importance to our ancestors as well as being the site of the conversion of the pagan Irish to the faith of Christianity. The Cathedral dates from approximately 1220, however one of the outer wall contains elaborate carvings that were preserved from an earlier building, thought to be from the 8th Century.

The dominating feature of this ancient site that can be seen for miles around is the beautifully preserved Round Tower. This Round Tower was constructed in the 12th Century. Its stands at 97 feet tall and contains four stories. The entrance to The Round Tower is located 4 meters above ground level. The oldest building located within this historic graveyard is the Beannachan, Saint Declan’s Oratory and it is thought to have been constructed in the 8th Century. It is said that the grave of Saint Declan resides within this wonderful building. Saint Declan’s Stone, is said to have some from Wales, and according to the Legend followed Declan back to Ardmore after a visit he made to Wales.

Saint Declan’s Well is situated at the start of a beautiful cliff walk in Ardmore Village. It is thought that Declan started a seminary in this area to preach about Christianity and that this natural well served as a baptismal font for conversion of the Native Irish to Christianity. Declan is said to have retired into a life of seclusion into a small cell he construct near the Holy Well. The waters from Saint Declan’s well are said to have healing powers, especially for eye problems.

Here, by the shoreline, it feels like we have returned to source, to the very place where St. Declan built his own monastic settlement on the hill circa 416AD. Declan retired for greater seclusion to a little cell below overlooking the Bay and the ruined Church and Holy Well still lie in quiet repose to his memory. Listen carefully and whisperings from times past can still be heard. It is they who have shaped who we are; they who inspire us to leave our legacy too. 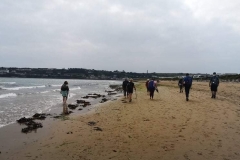 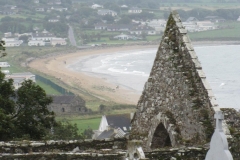 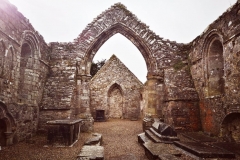 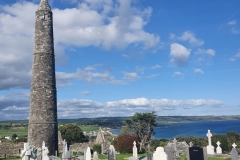 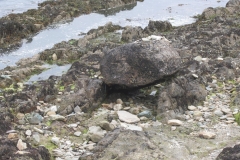 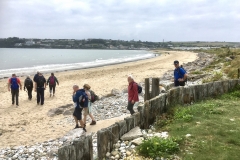 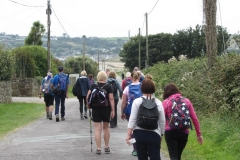 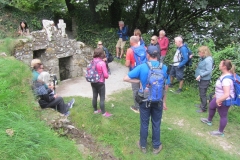