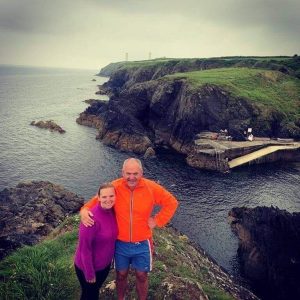 Phil and Elaine set out on their Waterford Camino adventure in 2017 and have been welcoming visitors from near and far ever since. In many ways they have chosen the path less travelled as a career option but for both of them there is no turning back. Phil is a former teacher with a recent PhD in Spirituality and Elaine is a former café manager who has ventured into tourism project management for the first time.

An accomplished musician and composer, Phil formed the Island of Ireland Peace Choir in the aftermath of a bomb in Omagh, Northern Ireland in 1998 that claimed 31 lives. The choir has become synonymous with the promotion of peace and inclusivity through their music. They have performed throughout Ireland, North and South, and have travelled to Messines, Krakow and Sri Lanka to spread their message of hope to persecuted peoples around the world. Phil and Elaine both share this love of music and regularly lead concerts with the High Hopes Homeless Choir Dublin. Music has become a means of empowerment for members of the High Hopes Choir, challenging them to take the steps necessary to get their lives back on track. Their story and their song have inspired Phil and Elaine beyond words.

Phil works as a motivational speaker with community groups around the country. He published ‘In the hands of the people – a new vision of Church’ in 2014 and his reflection on the life of Archbishop Óscar Romero in El Salvador was published by Veritas in 2015. His monthly blogs reflect on the power of the universe to connect us to what really matters in life. As Phil and Elaine take their first steps out on this Camino journey, they do so with the support of great friends and with a deep trust in a higher power to guide them safely on their way.

“Setting out is not covering miles of land or sea or travelling faster than the speed of light. It is first and foremost opening ourselves to other people, trying to get to know them, going out to meet them… It is possible to travel alone, but the good traveler knows that the journey is human life and life needs company.”