You are always calling us to follow you into the future,
inviting us to new ventures, new challenges, new ways to care, new ways to touch the hearts of all.
When we are fearful of the unknown, give us courage.
When we worry that we are not up to the task, remind us that you would not call us if you did not believe in us.
When we get tired, or feel disappointed with the way things are going, remind us that you can bring change and hope out of the most difficult situations.
(The lona Community) 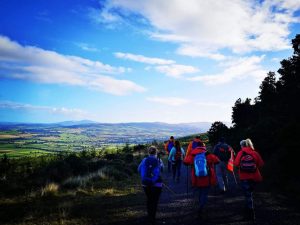 It’s one of the tourism phenomena of the 21St century. Seeking meaning beyond materialism, the number of pilgrim walkers completing the Camino of St James in Spain has risen from fewer than 1,000 in 1985 to an astonishing 350,000 in 2019. For most of these modern-day pilgrims, the Camino, with its emphasis on simplicity, mindfulness and reflective experience, is as much a voyage of inner discovery as a physical challenge. Stressing, not so much the final destination as the journey itself, hiking ancient paths has come, in many ways, to reflect the strongly minimalistic spirit of our age.

Until recently, however, few 21st-century pilgrims would have imagined Ireland as a destination for spirituality-based hiking. Conventional wisdom, even among the Irish walking fraternity, held that this country possessed little in the way of penitential paths – for proper pilgrim walking you had to head for Spain. 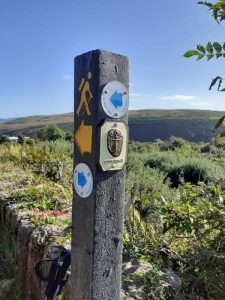 Many will be surprised, therefore, to discover that Ireland has a dense network of mystical paths and a vibrant pilgrim tradition, with most of these routes long predating the Camino. Lough Derg was, and still is, one of Europe’s foremost pilgrim destinations, while medieval penitents also journeyed to Glendalough, Skellig Michael, Gougane Barra, Croagh Patrick and Ardmore. Despite past popularity, however, Ireland’s sacred trails were almost totally forgotten for generations, since virtually nothing was done, until recently, to reignite awareness of their existence or promote their use.

It is sometimes said, however, that the past never completely vanished, but sooner or later comes to revisit us. And so, it has recently come to pass that Waterford’s patron saint – who is regarded by many historians as the first Christian missionary to preach the gospel in Ireland – is set to reclaim his pilgrim inheritance.

Born into a royal family of the Deise region, St Declan was initially taught about Christ by a holy man named Dioma. A strong tradition holds that Declan then journeyed to study Christianity in Rome and returned as a bishop to his native Waterford during the early 5th Century. 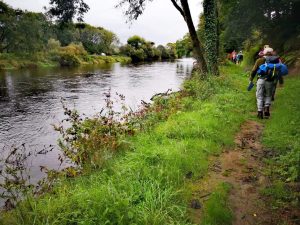 An ancient pilgrim trail that he footed, and was followed in his honour by many medieval pilgrims, is now being walked again as a richly symbolic journey. Meandering through extravagantly varied terrain in Tipperary and Waterford that is rich with antiquities, the newly revitalised St Declan’s Way commemorates the saint’s excursion from his monastery at Ardmore to the royal seat at Cashel.

The reason for his journey was the arrival in Ireland of a British-born evangelist who was also preaching the gospel. Which of them would become the leading Christian saint among the Irish? To sort out this conundrum, tradition has Declan travelling from Ardmore to Cashel to meet St Patrick. Here, it was agreed that the Waterford saint would have unchallenged authority over the Deise, with Patrick becoming primate of all Ireland. Patrick also promised never to enter the territory of Declan – so honour was maintained on all sides.

A fully upgraded 115km walking route, commemorating this historic journey and meeting, was re-opened last October by the Minister for Rural and Community Development, Heather Humphreys. Linking Cashel with monastic Ardmore, it follows the route taken by Declan on his way to meet Patrick. The result is that Ireland now has a spirituality-based trail that is comparable in length to the amount walked by most pilgrims visiting the Camino. 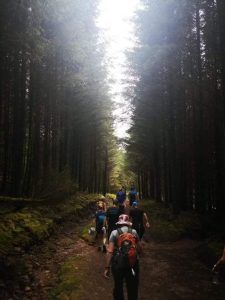 This is, of course, all well and good: it is one thing to put a path in place, but without marketing and packaging no pilgrim trail can become a true success. Ireland has never been particularly noted for promoting its abundant spiritual assets – and this is where Waterford Camino Tours have become innovators by stepping in to fill a void.

Recognising that it is not an easy task to walk St Declan’s Way, but that in completing it, many people discover courage they didn’t believe they possessed, Phil Brennan and Elaine Harvey have set about promoting and packaging the route. This now allows, their clients to enjoy the authentic experience of a long-distance pilgrim walk in Ireland with accommodation, transport, food and guiding all taken care of. 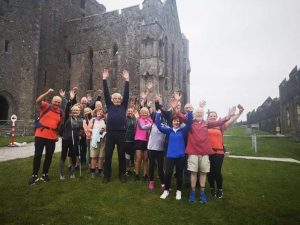 I have walked some of St Declan’s Way in their company and have been struck by how they give people the space to slow down and process their thoughts. By the time they have finished in Ardmore, most people find their perspective on life has become clearer and more comforting, which is a wonderful gift for any individual. Having greatly enjoyed walking, talking and breaking bread with some Waterford Camino groups completing St Declan’s Way, I would heartily recommend the experience as an unforgettable one not to be missed. 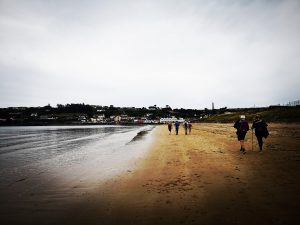 May the blessing of light be on you,
light without and light within.
May the blessed sunlight shine upon you
and warm your heart till it glows like a great fire
and strangers may warm themselves as well as friends.
And may the light shine from your eyes,
like a candle set in the window of a home,
bidding the wanderer to come in out of the storm.
(Adapted from a traditional Irish blessing)

About the writer: John G. O’Dwyer is a travel consultant from Thurles, Co. Tipperary and a regular contributor to The Irish Times. A keen hill walker and rock climber, John founded the Mid-Tipp Hillwalkers Club and has almost 30 years’ experience of leading hill-walking and mountain-climbing groups in Ireland, the UK, Europe and Africa. He is the author of the renowned ‘Pilgrim Paths in Ireland – A Guide’ among many other books recounting his time navigating Ireland’s pilgrim trails and is currently readying for a new book due to be released in Spring 2022 titled ‘50 Best Irish Walks’. 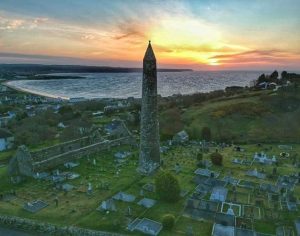 Dr. Phil Brennan and Elaine are looking forward leading groups from the States, Norway, Britain and Ireland on our signature ‘Celtic Camino in the steps of St Declan’ over the coming months in association with Cahir House Hotel and Mount Melleray Abbey along with our ‘Celtic Camino in Ireland’s South East’ in association with The Tower Hotel, Waterford. We welcome our first groups from Celbridge and from Killarney this March. We will also be teaming up with Original Irish Hotels to roll out unique Camino experiences to include Glendalough, St. Mullins, Ardmore, Gougane Barra and Dingle later in 2022. You can contact Phil and Elaine directly on info@waterfordcamino.com

« In the falling of the wave
All around the blooming heather… »