Waterford at the dawning of the day

Warm crimson rays stream across once raging waters to nudge us gently towards the promise of a new day. In the stillness, you hear the ebb and flow of the waves as they surrender in timeless homage to the creative power that makes all this possible. We on the shoreline become curious observers to the mystery of it all. Wave after wave land in soft melodic movements, each one suspended momentarily in time, before it recedes into the infinity from which it came. Light dances in broken reels on the rise and fall of breaking surf. There’s a rhythm to it all that draws us in. Dawn by the sea is yours and yours alone.

With high temperatures over the last few weeks, we’ve tended to start our walks that bit earlier. There’s so few around, we have these spaces to ourselves. The extended cliff walk from Ballymacaw Cove into Dunmore East (8km) is quite simply stunning in the early morning glow. It’s good to stand still and soak in the beauty that stretches out from the headland seawards. Energy ripples in mesmeric curves to calm the stirrings of the mind. It’s there for all to see and hear; the soft lilt of rolling waters as incoming waves break across flat rocks, the languid majesty of the seal as it basks in the sun, the silhouette of Hook Lighthouse as it peers out through misty skies. We’ve led visitors from the States and Canada across this headland in recent weeks. They want to come back; this time to spend more time in this hidden corner of Ireland. Dunmore East weaves a magic spell that leaves you wanting more! 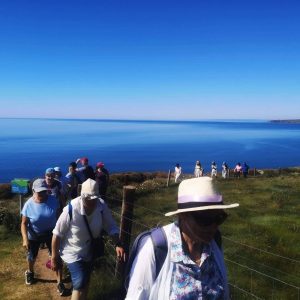 There’s something about the Waterford Greenway too in the solitude of the early morning. Dawn is that time of day when nothing breathes, the hour of silence. Our odyssey from Killoteran to Kilmeadan (3km) takes us out along the River Suir beyond the fretful stir of the distant city. Mount Congreve Gardens adorn our trails in exotic hues as the veil of mist slowly lifts from the passing river. Beneath the foliage a sign reads; “Here lies the place where the fishermen had their cuppa before heading back to Ballygorey”. In the quiet, you can still hear their hushed murmurings. They have paved the way we pass. 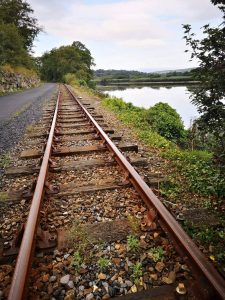 A heron swoops in to land, unannounced, and finds its sanctuary by the water’s edge. The rushes provide the perfect camouflage. Alone it stands in furtive disguise; statuesque and silent, concealing its intent from the world below. We cannot stay to see the drama unfold. The intrigue lingers long after we leave the scene behind. We move further down the line to take a leisurely spin from Durrow into Dungarvan. (11km) Our eyes adjust to dazzling light as we leave the dimmed enchantment of Durrow Tunnel behind and enter the exotic wildness that awaits on the other side. It’s one stunning vista after another as we freewheel by, Comeragh Mountains, Clonea Beach, Helvic Head… leading us from land to sea and beyond in seamless steps to the infinite. It’s good to leave the world as we know it behind for a while. We the voyagers feel the better for the journey. 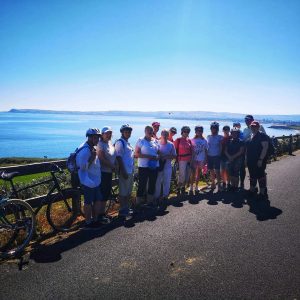 We were joined recently by a group from Kells, Co. Meath. For some it was their first time on a bike for over 40 years. They may never cycle the Tour de France but if there was a prize for laughter they’d have won hands down. For the first kilometer they had convinced themselves there was something wrong with their bikes. Before they knew it, they were cruising along, chatting, stopping for ‘selfies’, proud of their new found confidence on the bike. Our ever reliable Greenway Man, Garvan Cummins, who had set us on our way further up the track, met us on the viaduct over Ballyvoile 100 years to the week from the day it was blown up during the Civil War. His photos and anecdotes breathe new life into old places. Dungarvan on arrival was heaving with life. The harbour dazzled in the evening glow. We all had a 99 to mark the feat. It felt good to be alive!

The trail from the Mahon Falls down through Crough Woods (5km) parachutes you into a world you can scarcely believe is only a 40-minute drive from the city. Here on the outer frontiers, nature bares its soul at dawn with primordial abandon. There’s a subliminal symmetry to it all – sheep, mountains, rocky hillsides, a forest pathway and the soothing sounds of the River Mahon as it flows from source to the awaiting ocean beyond. We appear miniscule against such a towering backdrop. Yet, here, in this amphitheatre of stillness, we sense that our lives, though small and microscopic, have a worth. The universe has a way of reminding us that we have more to give, more to do. The river rolls by, yet to run its course. So too our lives. 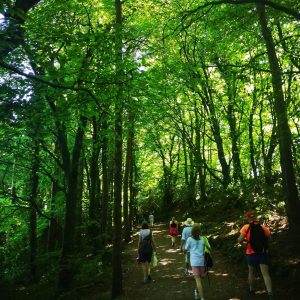 Day 3 along St. Declan’s Way brings us over the Knockmealdown Mountains. The veil lifts as morning breaks to reveal the universe in all its splendor. This is wilderness; bleak, barren, remote yet compelling in its simplicity and in the honesty it asks of you. The vantage point we arrive at is like no other. The lens widens to reveal a pattern that can be lost in the minutiae of life below. The panorama opens up as one vast kaleidoscope of vista and colour that rolls out gracefully to the seas beyond. Our eye gravitates to the River Blackwater as it navigates its mystical course through shimmering light en route to Youghal. There’s something reassuring about it all. It leaves imprints that linger long after the walking is done. 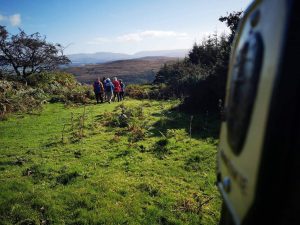 As the dew lifts on the banks of the River Blackwater at Lismore, we continue our journey along this age-old pilgrim path. Just 2 kilometers of exquisite beauty and peace before we take the back road to Cappoquin. The Castle we leave behind still beats to the pulse of a bygone time. It retains its mystique, its lofty walls privy to stories the passing world may never hear. In the distance, silent shadows emerge from shades of dawn as anglers take their place along the river bank. They stand there; still, focused, shrouded in the mystery that surrounds them. Invisible lines are cast into misty waters as we enter this sacred space. We pass this way but once, yet it stays with us. You’ve got to be there to sense it! 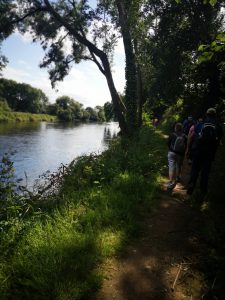 In the stillness of dawn, you come face to face with the wonder of it all. Silence of this kind is rare in a world that moves at pace. As the sun casts it’s golden glow across land and sea, you find peace in every step. Worries yield to a deeper wisdom. Swallows descend in telepathic streams to remind you of all that lies ahead. Time to get a move on! The mist lifts and a pathway, once obscured, becomes clear again. 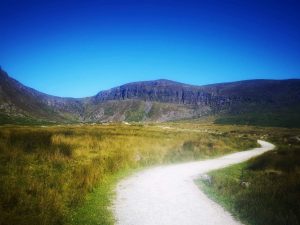 Dr. Phil Brennan and Elaine are looking forward to leading groups from around Ireland and beyond on our signature ‘Celtic Camino in the steps of St Declan’ later this August and in October in association with Mount Melleray Abbey and Cahir House Hotel. (August is full but we have a few spaces left for our October St Declan’s Way, 3rd to the 7th) We will also be teaming up with Original Irish Hotels to roll out unique Camino experiences going into 2023 to include Glendalough, St. Mullins, Ardmore, Gougane Barra, Dingle and St. Davids.You can check availability on www.waterfordcamino.com or contact us directly on info@waterfordcamino.com