’Til we find our place in the path unwinding…

On Camino, some days stay with you long after the walking is over. Saturday 30th of April was one such day. We organised a special ‘time-out’ with a group of Ukrainian families who were living in the Sports Centre in Dungarvan days after their abrupt exodus from their homeland. They hopped on the bus with eager anticipation – women, children, helpers, translators – all of us happy to be there, none of us quite sure what to expect. The light was trying to break through the grey skies that morning… a sign perhaps of what was to come.

Two weeks previously, we sang for them in the Lafcadio Hearn Gardens, Tramore. That Good Friday evening, as the cherry blossom fell from the trees and the waves rolled into shore, we felt the pain of a people we had never met before. Their faces conceal a deeper anguish. They loved the serenity of the gardens so much, maybe we could show them more. Lafcadio had cast his spell on this enchanted place as once disparate voices now merged as one beneath the Azumaya. Lilting harmonies to the refrain of ‘Will you go lassie go’ lingered in the evening air and we could hear the call to “the blooming heather” of the Comeraghs. The seed was planted for our day away in this garden by the sea – anything to lift their spirits and to let them know they were not alone. It was a simple gesture of unspoken solidarity. 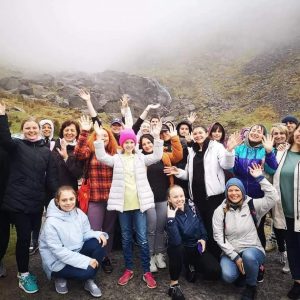 War is a senseless desecration of all that is good in the universe. One man’s delusions have scarred the landscape of a neighbouring country and wreaked merciless suffering on the lives of so many innocent people. No ideology can justify such horror. The people who emerged from the Sports Centre for our day away had lived the lives we live only weeks before. In an instant, the world as they knew it was no more. As we set off on the bus, their natural instinct was to turn around and share the moment with those they had left behind. A song was needed. Spotify and our Bosch speaker came to the rescue, and, before we knew it, a wave of melodic notes in foreign tones lifted the mood and swept us onwards on our way. It was beautiful, it was stoic and it echoed from somewhere deep in their being. With music came laughter. Not all of us could quite scale the vocal heights of the chorus. But we kept going. The theme for the day arrived unannounced. It got me thinking…

There is power in an idea no matter how simple it may be. We all have the potential to be creative, to think outside the box, to anticipate what could happen before it happens. One creative spark is all it takes to make a real difference to the lives of so many. It triggers a chain reaction of sorts that takes on a life of its own. Once the decision was made to run with the day, Hallahan’s Coach Hire agreed to look after the transport, Jenny Kiersey in Kilmacthomas was on board to sort the catering, Garvan Cummins, the Greenway Man, had bikes arranged, Audrey Hallahan in Hallahan’s Pharmacy had the Ukrainian families fully briefed on plans. Within an hour, everything was in place. One quick phone call to each person was all that was needed. Generosity of this kind goes below the radar of the passing world. Against the darkened backdrop, a light was shining, well before the dawning of the day. 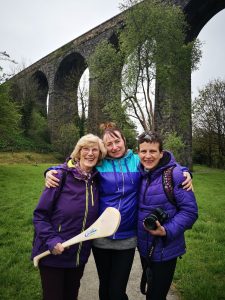 We find reserves of strength when we’re tested most. These Ukrainian people have courage in abundance. They have stopped following the news closely and have accepted that their stay here will be considerably longer than the 3 weeks they had planned for. They see this time as an “adventure” until the day comes when they are free to return home again. Home is Ukraine. It will always be. The mothers are of a unique kind. While their children are settling into school in Dungarvan, many are already doing online classes in English to help them navigate their way here. They WhatsApp their husbands and parents back home each evening reassuring them that they will be fine; encouraging, loving and strong. On the bus to the Mahon Falls, they show us photos from the life they once lived in Kiev or Lviv. They could have been us! They love Dungarvan and are overwhelmed by the warmth of the welcome they have received there. They told us all they knew of Ireland before they arrived was “green fields, Guinness and St. Patrick”. Their smiles disguise their brave resolve to persevere. They will be back home – some day! 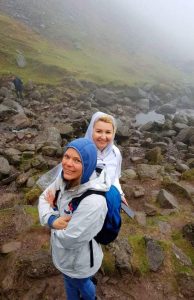 There is no greater therapy than time spent out in the great outdoors. Once you step out into the wild, your pulse beats to rhythm of all that is around you. The Mahon Falls in the heart of the Comeragh Mountains has a mystique that slows the stirrings of mind. In the stillness here, you find perspective! A soft mist gently hovered below this cathedral of stone as we made our way out to the Falls. There we were, 44 Ukrainians and 6 of us Irish, sharing a pathway carved out since time began. Like the pilgrims of old, the natural world showed us the way. We were summoned unknowingly to this hallowed space by the soothing sound of distant waters. The children did what children always do – they played. The came alive again as if freed from all they could not understand. The mothers were happy to stand there in silence and soak in the mesmeric power of it all.

In the moment, the universe never felt so reassuring. A deep peace fell in soulful streams from above. Against this towering backdrop, each tiny, miniscule life below had its value restored. Unscripted prayers rolled in quiet unbroken waves to the ocean beyond. There was symmetry in all that played out before us. They sang again – this time with more abandon than before. We knew they were happy. 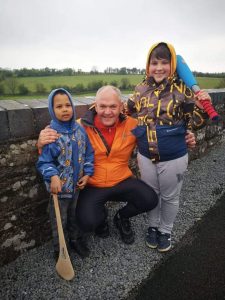 It’s the simple things that make life worth living. Lunch was just perfect beneath the viaduct in Kilmacthomas; plates of sandwiches, Flahavan’s flapjacks, Kiersey’s apple pie… we couldn’t ask for more! A local pharmacist, Jenny Kirwan, dropped by before we left with additional supplies should we need re-fuelling after our exertions on the bike. The cycle along the Waterford Greenway from Durrow into Dungarvan was the highlight for the kids. They couldn’t wait to get started! Garvan had his hands full trying to rein them in as he sorted bicycles and helmets for everyone. Once feet touched pedals a feverish excitement took over the whole lot of us. We free wheeled our way to Dungarvan, just about in one piece. Worries receded just in the moment as the welcome rays of sunshine kicked in to warm our bones. We laughed and we sang and we pedalled and before we knew it we were right back where we started. We were all in no rush for the day to end. 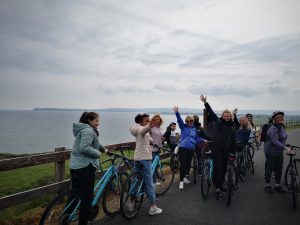 Gratitude has a value beyond words. When it was time to part, we gathered together outside the Sports Centre looking out across the Bay. Their appreciation for all who had made the day possible was of a kind that I have rarely seen before. They thanked us with their smiles, with their hugs and with the warmth of their goodbyes. We knew we would meet again. Many spoke of the peace they felt along the way; for some by the Falls, others as they walked to the river’s flow in Crough Woods, others as they watched their children breeze by en route to Dungarvan. These people have known journeys in recent times we can only imagine. Our paths crossed and we are the better for it. As glowing embers streamed across the evening sky, we sensed the connection with the life force that made it all possible. 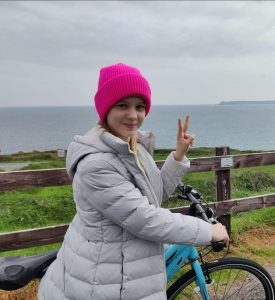 Dr. Phil Brennan and Elaine are looking forward to leading groups from around Ireland and beyond on our signature ‘Celtic Camino in the steps of St Declan’ over the coming months in association with Mount Melleray Abbey and Cahir House Hotel along with our ‘3 Day Camino Escape’ with The Tower Hotel Waterford as our base. We will also be teaming up with Original Irish Hotels to roll out unique Camino experiences to include Glendalough, St. Mullins, Ardmore, Gougane Barra and Dingle and we look forward to leading our first groups along St David’s Way in Wales this Autumn. You can check availability on www.waterfordcamino.com or contact us directly on info@waterfordcamino.com 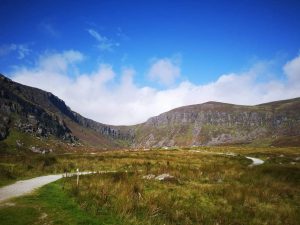 « All around the blooming heather…
Unscripted Moments »