I can still see her face as she gazed adoringly at her 4 year old child. There were tears in her eyes betraying a silent torment that she had endured for years. Her son had been bravely battling cancer and the latest tests were encouraging. Love and pain merged beautifully to light up a once darkened room. Hope soared with fragile ease from her world to ours. We were drawn unconsciously to her every move, private spectators to a courage that stirred us to the core. 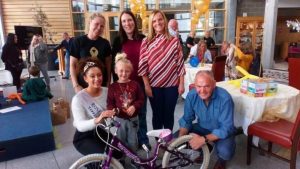 We had been singing at ‘Light it up Gold’ for The Childhood Cancer Foundation. The children played with pure abandon oblivious almost to the fuss around them. Laughter and song rippled out with stoic resolve into the awaiting arms of their loved ones. The lens of time had narrowed down to this one precious moment. I tried in vain to understand what their parents were going through. Their kind of love was summoned from somewhere deep inside, their bravery humbling.

We see it every day, ordinary people dealing with crushing blows in life but somehow finding the strength to wade their way through the storm. These people reveal something about each one of us. We humans are more than what the outward eye can see. It is what is on the inside that defines who we really are. Suffering drives us deeper to unearth hidden reserves we never knew existed. Gold refined by fire has a tenacity to match its glow.

I came across a true story recently that inspires on so many levels. 300 years ago, the Burmese army planned an attack to invade Siam (Thailand). The Siamese monks were in possession of the most amazing Buddha statue; 10 feet tall, in excess of 2.5 tons in weight and made of solid gold valued today around 200 million euro. Like those who passed before them, these monks viewed themselves as temporary custodians to a timeless treasure that would endure to the last. Given the monetary value of the statue, they knew the army would desecrate it and reap its spoils for themselves. They decided to cover the Buddha in 12 inches of clay to camouflage its true worth.

When the Burmese army arrived, all the monks were slaughtered. Everything was in ruins but the clay Buddha stood resolute having escaped the clutches of the unsuspecting pillagers. There it remained for centuries with its golden core hidden from generations of monks and visitors beneath its furtive disguise. In the mid 1950s, almost 250 years later, the monastery was to be re-located to make room for a highway. The monks arranged for a crane to come to move the clay Buddha to their new residence. To their surprise, the crane began to crack with the weight so they waited for a day for more powerful equipment. They covered it with plastic sheets to protect it from the oncoming monsoon rains.

That night, the head monk went out to check if their sacred statue was still standing. He was worried that the crane would have shaken the clay Buddha to the point of collapse and feared it would not survive the storm. When the light of his torch shone into the crack of the clay, he saw a glimmer… a reflection of something underneath the cloud of clay. He started to carefully carve away the shards of clay to find the glimmer grew brighter. 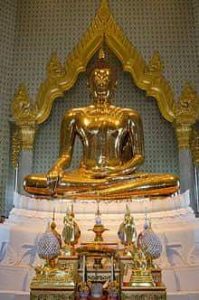 He rushed indoors to call the monks from their slumber. Together they chiselled with painful precision, inch by inch, until all was revealed. They marvelled in disbelief at the gleaming gold sculpture before their eyes. The statue was re-located to Bangkok where it resides in the Temple of the Golden Buddha. Every year, millions visit to worship at his feet. And to think it may never have been discovered.

“The purpose of life is to remove the layers so that more of the gold within us can shine and see the light of day. And the exciting thing is that every act of courage, every act of goodness will have an immediate pay off for you. Each time you do what you know is the right thing and follow your truth rather than the dictates of the crowd, a little more of the mud covering up who your truly are begins to fall. Each time you act with love rather than fear you become more of who you were meant to be. Every time you reach for your dreams, you begin to play your highest game and reach out towards your destiny” (Robin Sharma)

The modern world is consumed by how things appear on the outside. It is hard to resist the lure of the latest digital advancements or fashion accessories that flash up on our screens each evening. The transient glimmer fades fast in light of what tomorrow will bring. iPhone change from 6 to 7 at the speed of knots as the old gives way to new within months. The ground shifts in silent collusion with the prevailing winds. We drift trance-like from one conquest to the next searching for the Holy Grail that lies agonisingly beyond our grasp. Meanwhile the inner world goes unnoticed hidden beneath the trappings.

The problem with external power is that it is fleeting: when you lose the money, position and possessions, you lose the power. If you have tied your identity to those things, you will also lose a sense of who you are when they fall away. Life tends to draw us all back to source – to the power that comes from within. Faint whispers echo through the inner vault and we are reminded that we are part of something greater than ourselves.

Ten years ago, I saw things a little differently to how I do today. I lived life in the fast lane, taking on one challenge after another and rarely slowing down to find my bearings for life beyond business. Once on the treadmill, I moved at pace in feverish pursuit of my latest goal, running, running… running to standstill. My plan was to build a 7-Screen Cinema in my hometown of Gorey, sell it on to an operator and then turn my attention to developing the surrounding site into a very modern leisure amenity for the town. Everything was on track… well so I thought.

A turbulent economic storm loomed on the horizon, almost unannounced. I could see the signs and desperately tried to sell before it wreaked its havoc. Within months, my site had devalued by over 5 million euro and I was left stranded with crippling debts that I could not sustain. I was powerless to withstand the torrent and felt buffeted about by life forces beyond my control. Everything I lived for at that time was being obliterated before my eyes. Not for the first time in life I had to ‘dig deep’. Not for the first time, I struggled to hold it together. 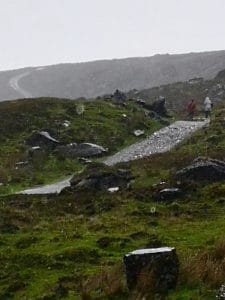 The next few years were a nightmare; dealing with the banks, selling the cinema to an operator who dragged out the retention fees on the build for 4 years in the hope that I’d be bankrupt and he wouldn’t have to pay, and ultimately parting with my own home in Waterford so that I could clear my debt and move on with my life. I could lie and pretend I found a strength from day one. I didn’t. It was a dark time. I was staring into an abyss from which there seemed no return. I slowly picked up the pieces.

“And so rock bottom became the solid foundation on which I rebuilt my life. Failure gave me an inner security that I had never attained by passing examinations. Failure taught me things about myself that I could have learned no other way… The knowledge that you have emerged wiser and stronger from setbacks means that you are, ever after, secure in your ability to survive. You will never truly know yourself, or the strength of your relationships, until both have been tested by adversity” (J. K. Rowling, prolific author in her Harvard commencement speech 2008)

Good friends became priceless to me. More than anything, they kept believing in me even when I was inclined to doubt. I remember one such friend, Helen, telling me after a tennis match “you know you should go back to college and do a PhD. If I could do it, you can.” I laughed and didn’t for a second believe that I would. I still look back with incredulity wondering how I did it. I’ve learned to build my life around people who are genuine and true and to let go of the rest. The key is to try to give back a little of what you have received. The formula is simple really but you have to push yourself beyond your comfort zone to make it happen. 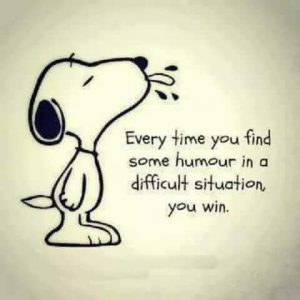 Above all, I guess I learned to slow the pace right down on occasion and connect to something deeper. Tramore became my haven; swimming in the Guillamene, walking around the sand dunes, looking out across the bay from the Doneraile – with a true companion by my side. Waves rolled into shore from the seas beyond stilling the spirit of the silent listener. The spark within was lit by all that was around me. From here there was no turning back.

“Starting today, learn more, laugh more and do what you truly love to do. Do not be denied your destiny. For what lies behind you and what lies in front of you matters little when compared to what lies in you.” (Robin Sharma)

Dr. Phil Brennan and his wife Elaine invite you to share in one of their specially tailored Caminos through Waterford County during 2019. The Waterford Camino experience blends walks/cycles, motivational talks and music.