We make the road by walking it. Some pathways lead to places that leave their mark long after the journey has passed. This place was altogether different. There was something surreal about it, something intangible… beyond words. 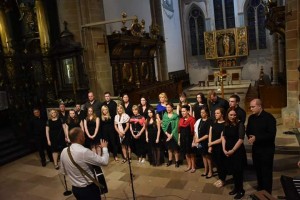 Auschwitz with ‘The Island of Ireland Peace Choir’ was memorable on many levels. I’ve stalled from writing my reflections ‘til now as I simply could not find the words. It has left me numb, aghast at the incomprehensible scale of what happened and sickened by the depravity of it all. We paid homage to the fallen in song. Faint notes soared tremulously into the darkened sky.

Normality on return provides its own sanctuary. Life moves on, but, somehow, all is not the same. The residual tremors echo in broken strains within the inner vault. The unfathomable lingers; vivid, compelling… incomplete. This is my feeble attempt to make sense of it all. 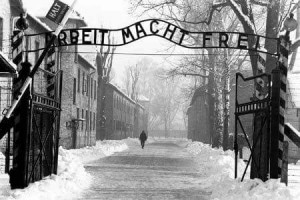 side. The sun-soaked pavements lulled us unknowingly back in time. Just for that one fleeting moment, the rhythmic cadence of our steps merged in melodic symmetry with those who had gone before us. We were entering a sacred space, a resting place for all too many. Of the 1.3million Jews who had passed through Auschwitz-Birkenau only 200,000 made the return journey. Above us, emblazoned over the steal gates, the hauntingly ironic words “Arbeit macht frei’ (‘Work makes you free’).

Over the next few hours, the horrors of the past would flash before our eyes like splintered reels on an old film – clear lines of red bricked buildings once used as a Polish military barracks, vacant eyes on the many portraits speckled across walls, the shoes, the hair, the cases, emaciated bodies… the sombre emptiness of the gas chambers. There was nowhere to turn!

Our guide pointed to the open air auditorium where a band once entertained the inmates as they passed in and out each day – the starkest backdrop surely to a musical ensemble. The cathartic pull between spectator and performer was palpable even now over 70 years later. 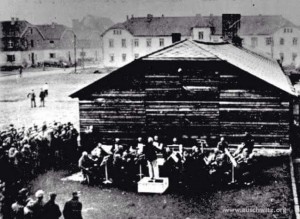 The main task of the orchestra was to play during forced labour or during the march back to the camp. After their recitals, they were required to work with the other prisoners. Musicians had the advantage of being hired as on-site workers which allowed them to assemble quickly once the command came. They had no choice but to acquiesce to the cold dictates of their masters.

Helen Niwinska, violinist in the ‘Auschwitz-Birkenau Women’s Orchestra’ recalls in her memoirs:

“The view from the entrance of the gate was the most depressing. Though we tried to focus on playing, we could not avoid seeing and hearing what was going on. Exhausted by long hours, the working prisoners were brought in, or dragged on the ground for those who could not survive another day of their ordeal.”

The first concert took place in January 1941, with seven prisoner musicians. By May 1942, the brass band had over 100 members and the symphonic another 71, an eclectic mix of Europe’s finest musicians, all Jewish… all playing for their lives. From deep within, they mustered the strength. Their ethereal sounds rose from the mire. 3 years later, these same musicians were still playing on the train platform in Birkenau as passengers heaved their way to an unknown fate.

One of the hardest things for me to grasp was the weird juxtaposition between life and death, crescendo and denouement, mellowed tones and piercing cries – a strange confluence of opposites. In an odd way, the camps were beautiful; impeccable landscaping, lush greenery everywhere, blue skies, perfect reflections of sunlight, birds chirping. There was a sense of calmness, of holiness even. We were in a hallowed sanctuary and their spirit remained close by. Here, amidst the vestiges of a bygone time, you sensed you were not alone. The hushed whisperings of their mystical airs could still be heard.

The ‘final solution’ did not just happen by chance. There was a plan, a grand disguise. The shroud of subterfuge was carefully crafted. Men, women and children no longer of value to their Nazi governors were ordered to leave their possessions in carefully delineated open bays and told to remember the number assigned to them. After their shower, they were to be repatriated up the country with their own home and land. The reality; carbon monoxide poisoning on a massive scale. Young and old alike ensnared in a web they knew nothing about. 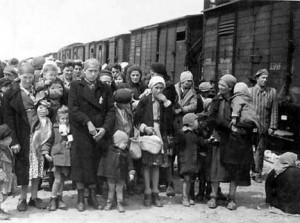 The trains arrived into Birkenau with military precision every day. An endless chain of carriages crept eerily through the misted wood and ground to a chilling halt. Human cargo, crushed with suffocating contempt, emerged bemused and broken. Up to 5,000 people spewed on to the platform in 2 daily cycles. Mothers clasped their children tightly with unswerving love. And still the band played – their faint strains barely audible amidst the mayhem. Elie Weisel recalls:

“It all happened so fast. The ghetto. The deportation. The sealed cattle car. The fiery altar upon which the history of our people and the future of mankind were meant to be sacrificed.”

Work was assigned to Jewish prisoners strong enough to withstand what was asked of them. It was their only hope of survival. The ‘Sonderkommandos’ oversaw the task of retrieving the bodies from the chambers and burning them in the adjoining ovens or in open air. Sunken heads, bowed and forlorn, doing the impossible. Incense lifted through the veil to somewhere beyond. We paused, then sang our prayer in solidarity with the persecuted:

“Sleep, sleep tonight, and may your dreams be realised. If the thunder cloud passes rain so let it rain, rain down on him… so let it be.” (‘M.L.K.’, U2)

We passed at pace from one barracks to the next, passive observers to an unspeakable truth – no words just silent sighs. Etched onto a shaded doorway, George Santayana’s one sentence said everything:

“The one who does not remember history is bound to live through it again.”

The world must talk, must continue to acknowledge the pain, the obliteration, the misguided ideologies – if we don’t we’re condemned to repeat the mistakes of the past. We need to honour not just the millions who died but the stoic courage of so many who persevered against the odds. 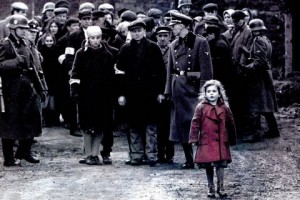 I always remember the powerful image of the girl in the red dress in Spielberg’s “Schindler’s List”. The vast kaleidoscope of human displacement narrowed right down to one girl’s final odyssey. Statistics overwhelm. The human story hits home. Viktor Frankl was a Jewish doctor moved to Auschwitz with his wife Tilly in 1944. His job was to build the railway lines along with hundreds of other inmates. Each morning they’d trudge through the snow bare footed, punctuated by the piercing shudder of rifle butts when least expected. Frankl stared adversity in the face and somehow made sense of it all. In his book ‘Man’s Search for Meaning’ he recalls:

“We stumbled on in the darkness, over big stones and through large puddles, along the one road leading from the camp. Anyone with very sore feet supported himself on his neighbour’s arm. Hardly a word was spoken; the icy wind did not encourage talk. Hiding his mouth behind his upturned collar, the man marching next to me whispered suddenly: ‘If our wives could see us now! I do hope they are better off in their camps and don’t know what is happening to us.’

That brought thought of my own wife to mind. And as we stumbled on for miles, slipping on icy spots, supporting each other time and again, dragging one another up and onward, nothing was said, but we both knew: each of us was thinking of his wife. Occasionally I looked at the sky, where the stars were fading and the pink light of the morning was beginning to spread behind a dark bank of clouds.

But my mind clung to my wife’s image, imagining it with an uncanny acuteness. I heard her answering me, saw her smile, her frank and encouraging look. Real or not, her look was then more luminous than the sun which was beginning to rise. A thought transfixed me: for the first time in my life I saw the truth as it is set into song by so many poets, proclaimed as the final wisdom by so many thinkers… The truth – that love is the ultimate and the highest goal to which we humans can aspire.”

In March 1945, Viktor was offered a move to the so-called rest camp, Turkheim where he worked as a physician until the 27th of April 1945 when the camp was liberated by American soldiers. He survived. His wife Tilly was moved to Bergen-Belsen from where she was never to return. Frankl’s mother Elsa and brother Walter died at Auschwitz. Years later, Frankl reflected:

“They could torture me but could not take away my power to choose. Everything can be taken away except ONE – to choose one’s attitude, one’s own way”.

We live in this twilight time, between darkness and light. Our story ebbs and flows as a series of melodic movements in the symphony of the universe. The search for meaning is the search for the lost chord. Its discovery changes everything. Only then will discord cease and the melodic balance of the universe be restored. There is a life force out there strong enough to subdue, to liberate. It resides within each of us.

On the walls of the ‘Room of Choices’ in the Oscar Schindler Museum, we were reminded of the poignant power of music to attune us to this new frequency:

“We were terrified. All of a sudden he began to sing. We all joined him after a while. When we were singing, we forgot the fear.” 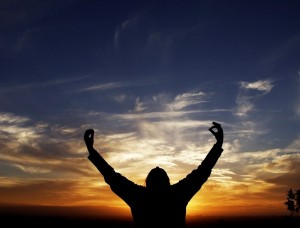 Now, 6 months on, I’m beginning to see more clearly. Auschwitz-Birkenau has awoken me from my reverie. My living is determined not so much by what life brings to me as by the attitude I bring to life; not so much by what happens to all of us as by the way our minds look at what happens. We all have a song to sing. You must choose yours carefully and direct your energies into it. Stay close to what is genuine and true. Love can overcome all that diminishes life. Love sustains us on our way.

Dr. Phil Brennan is the founder and Musical Director of the Island of Ireland Peace Choir. The choir’s trip to Krakow will feature on Nationwide Friday 26th, January, RTE 1 at 7pm, the evening before ‘World Holocaust Remembrance Day’.