Walking in the steps of St. Declan from Cashel in Co. Tipperary to Ardmore in Co. Waterford lingers with you long after your odyssey is complete. Here on this ancient ‘Rian Bó Padraigh’ once trodden by the saints of old, we pass castles and forts, holy wells and hallowed vaults, breathtaking views and barren places – an eclectic collage of visual sensations that seep deep into the prism of the mind as we make our way. This is more than a journey of 100 kms (62 miles) but a journey through time of well over 1,500 years. Along the Camino, you unearth truths that may otherwise have passed you by. The clouds part to allow once hidden rays cast their hue across the tinged land. You feel good to be alive.

The 5 days of walking on our Camino across St. Declan’s Way gives you space to breathe, to step back a little from the world for a while and connect to source again. It is good to detox, to clear the head of all that burdens it, to find perspective. Now more than ever we all need it. It is strangely reassuring to know that whatever it is you’re going through, others before you have gone through more and persevered to the end. You sense the voyagers who trod these paths for centuries; saints, pilgrims, labourers, emigrants, rebels, visionaries… each one with a story to tell. So when it came to taking our first tentative steps from beneath the Rock of Cashel, this historic trail took on a whole new meaning. Our coordinates steered us onwards. Once you set out, it’s the company and the chats that carry you along. Each Camino is only as good as the people you share it with. 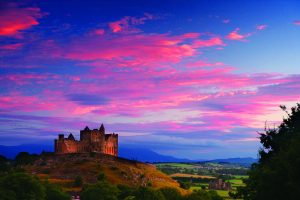 We were stunned by the breathtaking beauty of the Rock of Cashel as it towered majestically through the morning mist. It was at this very location St. Patrick conferred on St. Declan the status of Bishop of the Déisi Muman people of Waterford after one of the many occasions when they met here. What few realise is that Declan had been working with missionary zeal in the South East of Ireland long before the coming of St. Patrick in 431AD and that his epic Camino over and back to Cashel from Ardmore to meet with Patrick actually predates the iconic Camino de Santiago in Spain by over 400 years. As you leave the dimmed enchantment of this citadel of stone behind, you know you are not alone. There’s a life force at play here that does not let you down. You need to walk it to feel it!

Its stories that bring a place to life. There are so many ruins you pass along the way, it’s good to rest awhile by the remnants of old and listen to faint murmurings from a bygone time. Lady’s Abbey is one such place that draws you in. Silhouetted against the mountain backdrop of the Knockmealdowns, its shaded vaults arch in mystical homage to its medieval origins as a Carmelite Monastery. On first glance, the ruin lies lonely and neglected in the surrounding overgrowth, as if secretly surrendering to the passing of time. Here, veiled in mystery, you enter a sacred space in quiet abandon to all that has gone before. 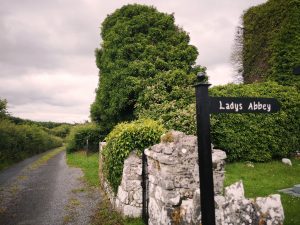 Our eyes were drawn to the tombstone of Sarah McGuire who lies buried in the chancel of the Abbey, close to where the holy font or ‘piscina’ is located in a place of eminence by the south-facing wall. The rectangular gravestone, which is the oldest on site, bears an inscription which reads “Here lie ye remains of Sarah McGuire who departed life Feb. 1st, 1780, aged 22yrs. Pray for her”. The story, which varies slightly, tells of a woman from Spain/America/West of Ireland (depending on the version you read), who, knowing she was about to die, dreamt of where she wanted to be buried, believing that anybody buried there would go straight to heaven. When she died, her relatives found a map that she had drawn which directed them to Lady’s Abbey, a place that neither Sarah nor any of her relatives had ever seen. Soft, dulcet tones, still audible, make her presence felt as sparrows soar homewards beyond the gaze of the passer-by. We both sensed what neither of us could fully articulate. Impressions of this kind stay with you. 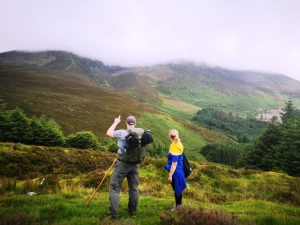 Perhaps the most dramatic stretch of the entire St. Declan’s Way is the trail over the Knockmealdowns that starts out from Goatenbridge in Tipperary and ends in Lismore Waterford some 26 kms (16 miles) later. With the help of our local guide from Knockmealdown Active, Mark Ryland, we opted to take the original path of St. Declan on our right across the lowest crossing point of the mountain range – Bearna Cloiche an Buidéal (Bottleneck Pass). Leaving the relative sanctuary of the trees behind, our feet sank deeper into the dense ground cover of heather – both bell and long heather – and gorse, rushes and moorland grasses. Every step matters!

This is wilderness; bleak, barren, remote yet compelling in its simplicity and in the honesty it asks of you. Here on the outer frontiers, you come face to face with the truth about yourself. No distractions. Just you and the universe! Our descent made us feel alive again. We’d conquered our Everest and felt the quiet elation in making it this far. This vantage point from above is like no other. The lens widens to reveal a pattern that can be lost in the minutiae of life below. The panorama opens up as one vast kaleidoscope of vista and colour that rolls out gracefully to the seas beyond. Our eye gravitates to the River Blackwater as it navigates its mystical course through shimmering lighten route to Youghal. There’s something reassuring about it all. There is nowhere you would rather be!

Mount Melleray Abbey, near Cappoquin, is one of the major milestones along St. Declan’s way. The monastery has been home to a community of Cistercian (or Trappist) monks for nearly 200 years. The Cistercians were founded in 1098 by Robert of Molesme, a Benedictine monk, in Burgundy, who wanted to embrace a simpler and stricter version of Benedictine life. In the eighteenth and early nineteenth centuries, Irish men who wished to become Cistercian monks travelled to the continent. In France in 1830, following a revolution, English and Irish monks were expelled from the Abbey of Melleray, in Brittany, and they travelled to Ireland seeking a new home. The rest is history!

St. Declan’s Way leads down through the quiet surrounds of Mount Melleray. In this place, past and present merge seamlessly as one. The priests go about their daily routine unruffled by time; the lands are farmed, the cows are milked, the café reverberates to the din of the curious visitor. The school may be closed since 1974 yet you sense an energy in the calm, a resolute belief amidst the changing vagaries of an uncertain world. Those who live here rise before dawn to pray. Places of stillness are needed now more than ever. We look forward to welcoming our first visitors to the Guest Rooms in Mount Melleray on two of our six nights. In times past, a monastery became a place of rest for pilgrims on their journey. Some traditions should never be lost to modernity!

Lismore is a place that you cannot help but fall in love with as you pass through its quaint streets. It has a unique charm that makes you want to stay longer than your tiring limbs might allow. Lismore is justifiably proud of its long and distinguished history. Tracing its origins to the arrival of St Carthage in 636AD, Lismore was once a university city attended by scholars from all over Europe. The town is beautifully situated on the well wooded banks of the Blackwater. The Cathedral on the right is on the grounds of the monastic school foundations which reached the zenith of its reputation during the 8th and 9th centuries. There is nowhere quite like Lismore.

Alice O’Donoghue, from Lismore Heritage Centre, guides us down the hillside across the River Blackwater and reminds us of the mystical allure this place had for travellers through the centuries who, as they made their way to Lismore for study, no doubt landed at Youghal, the seaport of the Blackwater, and proceeded to follow a highway called the ‘Bealach Eochaille’ along the path of St. Patrick’s Cow, connecting Lismore with the interior of the country. The Castle still beats to the pulse of times past. It retains its mystique, its mesmeric charm; its lofty walls privy to stories that remain untold. The river flows serenely below as if knowingly bowing to the many who have walked its banks before. 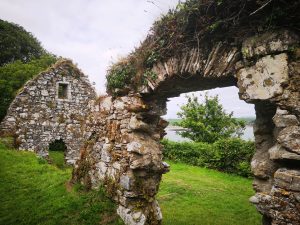 Each day on St. Declan’s Way brings something new; a welcoming reception in Waterford City on day 1 followed by 5 days of walking over the 100 kms (62 miles) trail from Cashel to Ardmore. On Camino, it’s not the destination that matters; it’s the steps in between. An exception could be made for Ardmore. Here, by the shoreline, it feels like we have returned to source, to the very place where St. Declan built his own monastic settlement on the hill circa 416AD. Declan retired for greater seclusion to a little cell below overlooking the Bay and the ruined Church and Holy Well still lie in quiet repose to his memory. Listen carefully and whisperings from times past can still be heard. It is they who have shaped who we are; they who inspire us to leave our legacy too. 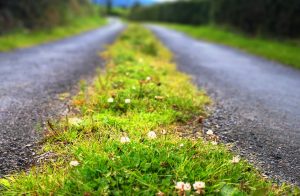 Dr. Phil Brennan and his wife Elaine look forward to rolling out St. Declan’s Way as their signature Camino experience from Spring 2021. Special thanks to Kevin O’ Donnell and Mark Ryland from Knockmealdown Active and to Br. Phil Ryan for guiding us on our way. For further information, see the link attached or contact Phil and Elaine directly on info@waterfordcamino.com Visit our website at; www.waterfordcamino.com