Silent Night – the magic of Christmas

Christmas time has its own magical allure. The lights, the gifts, the music, the myriad of sporting spectacles beamed live to our sitting rooms, the gatherings among family and friends, the scent of the turkey roasting in the oven, the frenzied shopping, the carnival atmosphere in town; all combine to create something wonderfully festive that eases us almost unknowingly through the dreariness of the Irish winter. Now, as the year rolls to a close, a faint glow makes its presence felt. The star still shines, oft’ hidden and unnoticed, to light the way. 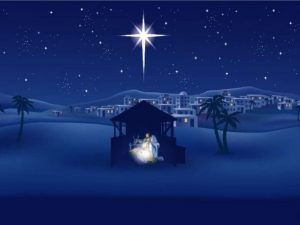 ‘Silent Night’ carries us back to where it all began. The poignant lilt of harmonies along with unadorned lyrics draw us deeper into the wonder of the Christmas story. This age-old carol has the power to stop us in our tracks. I’ve seen an elderly woman in a coma in a nursing home momentarily re-awaken and join us in song, noticed hardened men drawn to a space they thought they had left behind, viewed children by the crib transported on a musical odyssey back to the manger in Bethlehem, watched a homeless woman cradle the infant child while melodic notes from carol singers close by took on a meaning only she knew.

Christmas without ‘Silent Night’ would feel incomplete. Over the past 40 years, it has been the one constant for me in the build up to Christmas. We’ve had to cancel a concert in Christ Church, Dublin this year, our visits to local nursing homes and our annual ‘Carols for our times’ in the Edmund Rice Chapel. In these strangest of times, it’s the one part of Christmas I’ll miss the most. ‘Silent Night’ is a warm balm on the coldest of Winter nights. We’ll appreciate it all the more when we do get back. 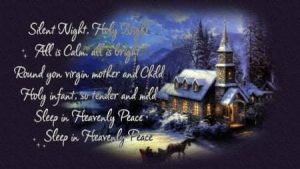 The origin of this timeless carol is worth remembering. In 1818, a roving band of actors was performing in towns throughout the Austrian Alps. On December 23rd, they arrived at Oberndorf, a village near Salzburg, where they were to re-enact the story of Christ’s birth in the small Church of St. Nicholas. Given that the church organ was out of commission and would not be repaired before Christmas, the actors decided to present their version of the Christmas story in a private home. 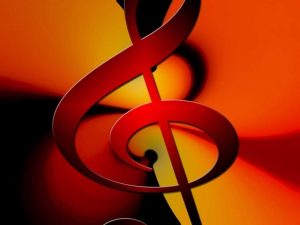 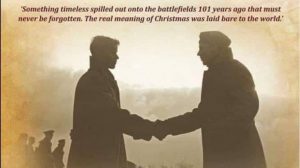 Against the bleakest of backdrops, a spark was lit and the shroud lifted. Humanity had become participants in the nativity story 1914 years on revealing the face of the infant Jesus to the world. Their song echoes in the stillness of the night. Hidden in the silhouette, their hushed murmurings can still be heard. Echoes from afar whisper softly through veiled skies. The men of 1914 did not just remember the first Christmas; they lived out its meaning. 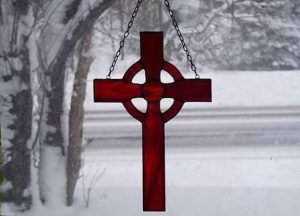 I was privileged to travel to Messines in December 2014 with The Island of Ireland Peace Choir to pay homage in song to the young men of the Christmas Truce on the 100th anniversary. It was deeply humbling to see the graves of two Irishmen side by side in one of the tiny cemeteries scattered across the furrowed fields. On one headstone: 24th of December 1914, Private Delaney; on the other, 29th of December 1914, Private Murphy. In between… the Christmas Truce. Something timeless spilled out onto the battlefield that silent night that must never be forgotten. Sleep in heavenly peace.

At the end of our concert that evening, we chose to give our Waterford Crystal vase to Marie-Therese, and not to the local dignitaries, much to the delight of almost everyone in the audience. We could see in her beautiful simplicity, in her resilient smile, in her resolute kindness proof of the power of human goodness to triumph even in those very situations that threaten its existence. Then it is only kindness that makes sense anymore. Maybe, therein lies the message of Christmas. 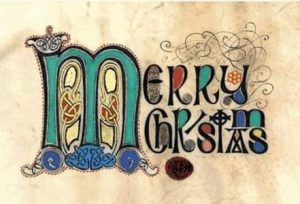 Phil and Elaine would like to wish you all a peaceful and happy Christmas and everything you wish for in 2022. We look forward to leading visitors from near and far on our Camino trails in Waterford, Glendalough, St. Mullins, Gougane Barra and Dingle over the coming year. For further information, check out our website on waterfordcamino.com or email us directly at info@waterfordcamino.com

« A voyage into the unknown.
Time to rise again »